All That You Need to Know About Watermelons

Who doesn’t enjoy having freshly sliced watermelons or a glass of cold watermelon juice in this scorching heat? On its national day, here are some facts that you need to know about this hydrating, fresh, and sweetly delicious fruit.

It is said that watermelon was first discovered in Africa, specifically in Egypt. There has been evidence of watermelon seeds that have been found in tombs and hieroglyphics, dating back to the second millennium B.C. Then the fruit spread from the Mediterranean to Europe, before making its way to the United States.

Did you know that Watermelon is 92% water? That means if you eat watermelons, you will stay hydrated and will feel full for a long time especially in the summer season. It also has many beneficial nutrients that are good for your body, like Vitamin C, Vitamin A, Potassium, and Magnesium. It is also considered a great source of sugars that is low in calories. So, you’ll be able to fulfill your sweet cravings without consuming too many calories.

Believe it or not, there’re many watermelon types that you can find worldwide!

This type of watermelon would be perfect to enjoy on a sunny beach day, without having to worry about seeds falling everywhere. Can you believe that there’s a watermelon that is not red, but yellow?! Well, yellow watermelons do exist, and they happen to have originated from Africa. It is said that they’re even sweeter than the red ones! The name says it all. These mini watermelons can be grown in smaller areas and they are seedless as well. 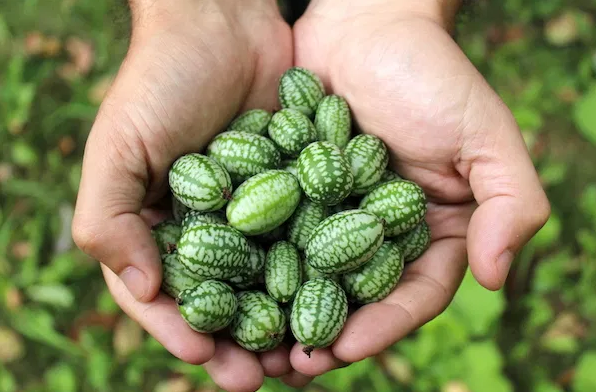