We’re living the fast life and rarely press pause, which puts us in a lot of pressure to have fun and yet relax during our time off. The ultimate choice would be going on a wellness staycation in a country full of variety, such as Austria.

Spa and wellness staycations are becoming a thing as people prefer those destinations where they can unwind and relax.

Replete with natural hot springs, fresh Alpine air, sweeping mountainous views, and warming hospitality or visit a deliciously warming outdoor pool, revigorating steam rooms, and quaint sauna cabins nestled in the most picturesque backdrop.
Imagine soaking in a 37-degree outside pool while being surrounded by snow-covered landscapes and freezing cold temperatures? But even throughout the summer, after a hike in the mountains or a scenic bike trip around the lake – ending your day luxuriating in open-air pools.Many of Austria’s modern spas now sit on sites which were popular as far back as Roman times.

Why Spas and Thermal Baths are so good for us

Water is literally all life on this planet, aside from us not being able to survive without it, the healing properties of water are numerous. Those healing factors are an important feature of thermal baths

You can choose from about 40 thermal spas in Austria filled with bubbling, steaming water. A spa is only allowed to take the moniker “thermal bath” (“Therme” in German) if it has its own spring, and its groundwater emerges at a temperature above 20° C (68° F). Even slightly radioactive water containing trace amounts of radon has been shown to have health benefits, specifically a stabilised immune system. And sulphate water has a positive effect on the epigastric region. Your spa of choice will be happy to tell you more about their specific thermal water and its effects.

So, there’s such a thing as ‘historic spa town’ and we’re here for it! Europe's most modern Alpine health and recreation resort, the Alpentherme Gastein in the historic spa town of Bad Hofgastein, is blessed with tremendous views of the giant glaciers of the Hohe Tauern National Park.

The Alpine Spa Gastein sauna world is made of wood, natural stone and glass with its own mountain lake, leisure and wellness areas, a relax and a family world. And for those traveling as a family, it offers recreational experiences for parents and children. If you’re on a ladies trip then this would make you thrilled. The Alpine Spa Gastein Ladies Spa an undisturbed place of retreat only accessible to women.

Its waters contain the natural noble gas radon, which is said to regenerate the function of disrupted cells and mobilize the body’s immune defenses. 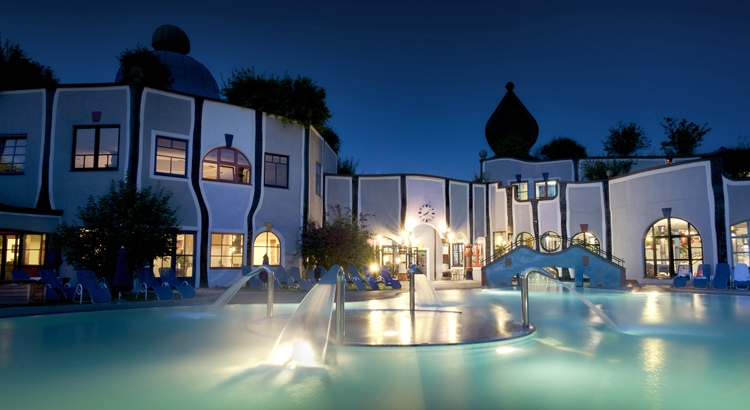 The perfect mish-mash of modern and ancient is found in Rogner Therme Bad Blumau .It boasts with large impressive columns, rooftop gardens, and domes, and colourful meadow landscape.

There's a dead sea salt grotto and two hot springs, the Melchior and Vulkania, which let you float in highly mineralized Vulkania salt water. If you’re looking to explore more, you can also choose a  sound meditation and elderberry wraps. Tyrol's largest and most modern thermal spa called the AQUADOME is located in Längenfeld, an hour from Innsbruck. Its spectacular glass structure was transposed upon the 50,000-m2 plot in an outstanding architectural fashion. Resembling gigantic flying saucers, the three pools (one with salt, one sulphur and the other a massage pool) almost seem to float weightlessly above the resort, constituting a true architectural wonder.

Enjoy endless options of spas from a loft sauna, a canyon sauna with the odd thunderstorm, an ice-cold grotto, and an "experience shower" where you can choose from different settings, including mist, tropic rain, and waterfall.

The Tauern Spa in Zell am See Kaprun is even more unique during winter. It is worth the visit just for its panoramic views of the snow-capped summit of the Kitzsteinhorn mountain, best enjoyed from the glass skyline pool on the top floor. After a warm spa experience you can try freshly baked bread rolls at the "baking oven sauna”. It is the first lodge in Central Europe combining wellness and nature experience by offering different kinds of nature safaris all year round along side featured services and numerous indoor and outdoor pools and five different saunas. It is located directly at the Neusiedler See National Park – Seewinkel in Burgenland, in the middle of a region that has been designated a UNESCO World Heritage Site.