The Top 10 Family Attractions in Austria

It’s always hard to pick a family-friendly destination for an international trip but Austria would be the easiest choice of them all. The country has plenty of interesting things to do and places to visit that will excite the entire family.

You can even visit the world's oldest amusement park to the world'soldest salt mine, and from snow activities in summer tohistoric palaces, there is no end of entertainment for the little ones in Austria.

No one leaves this palace without having the greatest time. Whether you visit the Children’s Museum Schoenbrunn Palace, dress up as His and Her Majesty, enjoy a special guided tour for children through the State Rooms or explore the Maze with the Labyrinth and Playground you’ll never run out of fun choices.

Just a short walk from the Palace, you’ll find the oldest zoo in the world, Schoenbrunn Zoo.

The zoo is part of the UNESCO World Heritage Site Place grounds and has been named Europe’s best zoo five times in a row. You get to choose from 250 attractions at the Vienna Prater, from auto-drome rinks to ball toss and shooting booths, exciting roller coasters and ghost trains to flight simulators.

If you dare, stop by the 124-years old Ferris Wheel, the most famous attraction of them all.

The destination also offers F&B experience with more than sixty cafés and restaurants, and ice cream and snack stands.

The Viennese call this part of the Prater the "Wurstelprater" (literally: Clown’s Prater, the equivalent of an old-fashioned amusement park). Snow Snow and more Snow! Whether snowball fight, sliding fun across gentle snow slopes, adventurous hiking tours on the secured glacier trail or chilling out on sun loungers at the glacier plateau – the Ice Arena at the glacier of the Kitzsteinhorn near Zell am See Kaprun is the ‘it’ destination for your family.

The Ice Arena is easily accessible by the cable cars of the Kitzsteinhorn. It provides adventurers of all ages during the summer months.

Race across the white glacier slope on slide sheets and toboggans, which can be hired free of charge on site, and take the magic carpet for a comfortable return to the start. We’ve never been to a salt mine so this would be super interesting. You can visit three of the oldest salt mines in the world in Austria – each of them located within 75 minutes of Salzburg.

The visits at the Salt Mines in Hallein, Hallstatt and Bad Aussee all begin with a comfortable train ride into the mountain, where experienced miners guide you and explain the mining process.

This would be very Instagramable, try the raft ride across an underground lake and an exciting descent on two mining slides. Read More: The Most Delicious Dishes in Austria

Read More: The Most Surreal Palaces and Castles to Visit in Austria

This is how things would seem if you looked down from the sky! Minimundus, is a miniature world at Lake Wörthersee in Carinthia and a place for exploring, having fun and learning.

With models from every continent, the world is miniaturised with its 159 most beautiful buildings, covering over 26,000 m² of parkland.

On a scale of 1:25, the most beautiful buildings have been recreated in detail according to original plans and using original materials such as marble, sandstone or lava basalt. 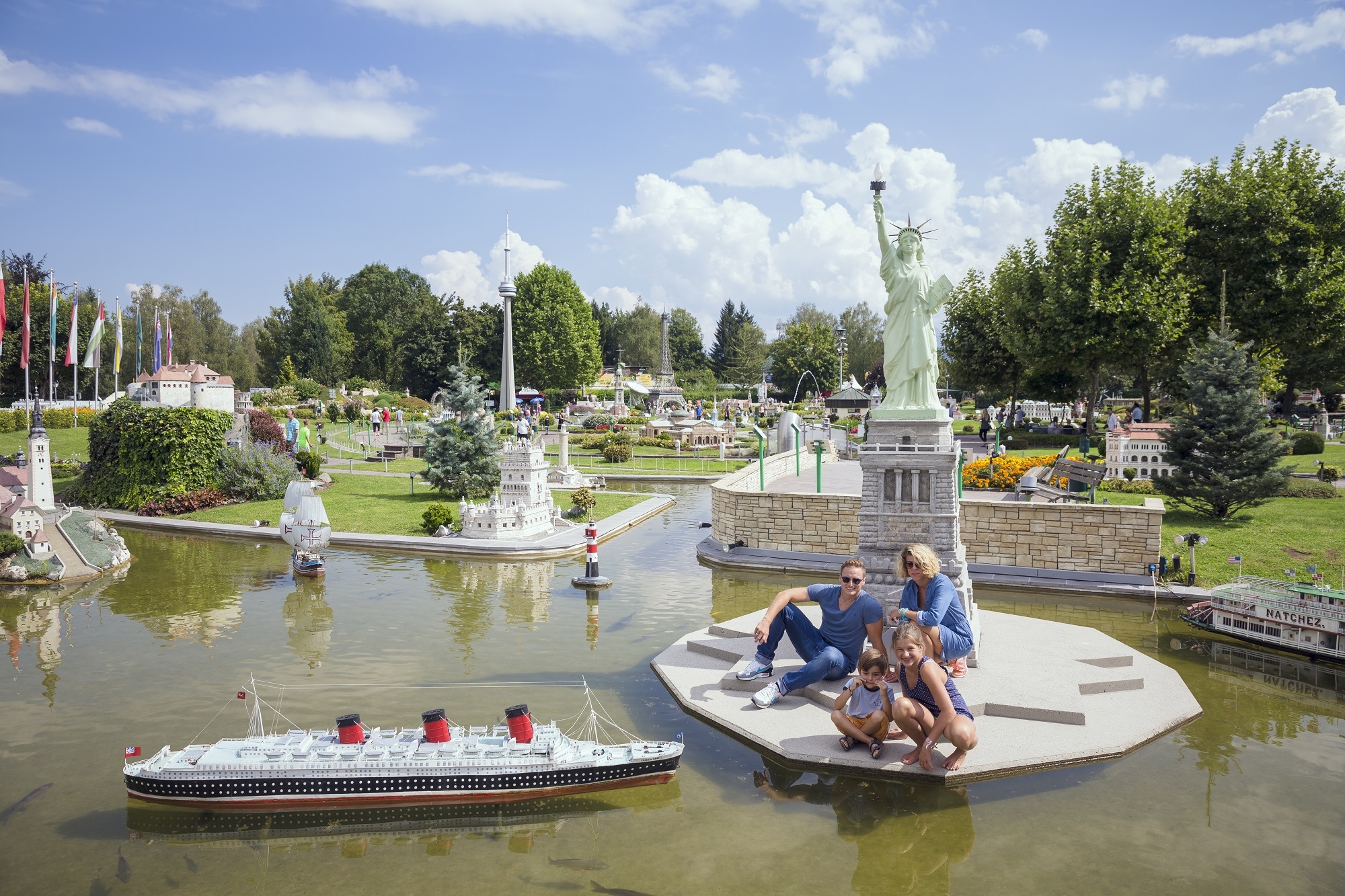 A true wonderland. Walk into a museum full of Swarovski crystals and chambers of wonders, an adventure playtower, extensive playgrounds including a labyrinth and a carousel.

The playtower offers climbing, rocking to sliding on four different levels experiences arranged on top of each other.

Create fun memories at the playground landscape under the open skies, where a spectacular, 25-meter long climbing route and twisty ball runs offer plenty of thrills. And the water play area is a fun-filled adventure for the whole family!

A true wonder is the green labyrinth in the form of a hand by André Heller that invites the visitor to explore and play hide-and-seek.

The Carousel in the garden of the Giant, created by Spanish designer Jaime Hayon, is definitely out of a dreamland. Have a fun and interactive treasure hunt where children can explore the fortress grounds on their own at a 900 year old fortified castle from the Middle Ages.

As one of the best-preserved buildings of the late Middle Ages, it towers 100 meters above the Salzach Valley and offers fascinating insights into architectural history and life in the fortress.

Little ones can have fun with numerous games and activities in the courtyard and can even dress up as squires and knights.

Make sure to witness the spectacular demonstrations with local raptors like eagles, hawks and buzzards by falconers of the historical state falconry which take place several times a day.

Throughout the year there is a jam-packed calendar of events with night tours, special falconry programs, festivals and an Advent market. This one is for the bravehearts. Dare to try the on the first alpine roller coaster of the Salzburger Land in Zell am See Kaprun.

Guided safely on rails, racing with up to 40 km/h downhill in two-seaters is fun for both adults and children and available in summer as well as in winter. One of the highest zoo’s in Europe, the alpine zoo is located at the foot of the Nordkette, above the roofs of Innsbruck, the provincial capital of Tyrol.

The incredible destination is at an altitude of 750 m and is home to over 2000 animals and flora and fauna of the Alps.

Watch unique animals such as lynx, marmots, chamois, birds of prey and even brown bears up close. Make sure you ask about the fun ride up the mountain with the Hungerburg funicular before heading there. Known for its ‘Trick Fountains’ for more than 400 years, Hellbrunn Palace near the city of Salzburg has always enchanted its visitors.

Perfect for a dream photoshoot, the spacious parks, and gardens of Hellbrunn Palace are partly landscaped, partly natural biotope. They are a marvellous place to unwind, take a walk and enjoy a bit of outdoor sport.

Children will immediately be drawn to the big adventure playground.

There’s even something more special during winter, throughout the advent period, the palace courtyard and the old driveway are transformed into a festive Advent market.