DUBAI: From Dubai to Beirut to New York and Washington, D.C., Saudi National Day was celebrated outside of the Kingdom on Sunday as a show of patriotism by Saudis abroad and as a sign of friendship by countries around the world.

The Dubai airline operated a special one-off A380 service, known as EK 813 and EK 814, on Sunday to the capital city of Riyadh, touching down at King Khalid International Airport at 3:30 p.m. The return flight was scheduled to depart at 6:50 p.m.

A YouTube video from Emirates also showed crew handing out scarves embroidered with the countries’ flags, as well as white roses, to passengers while boarding the A380 aircraft. 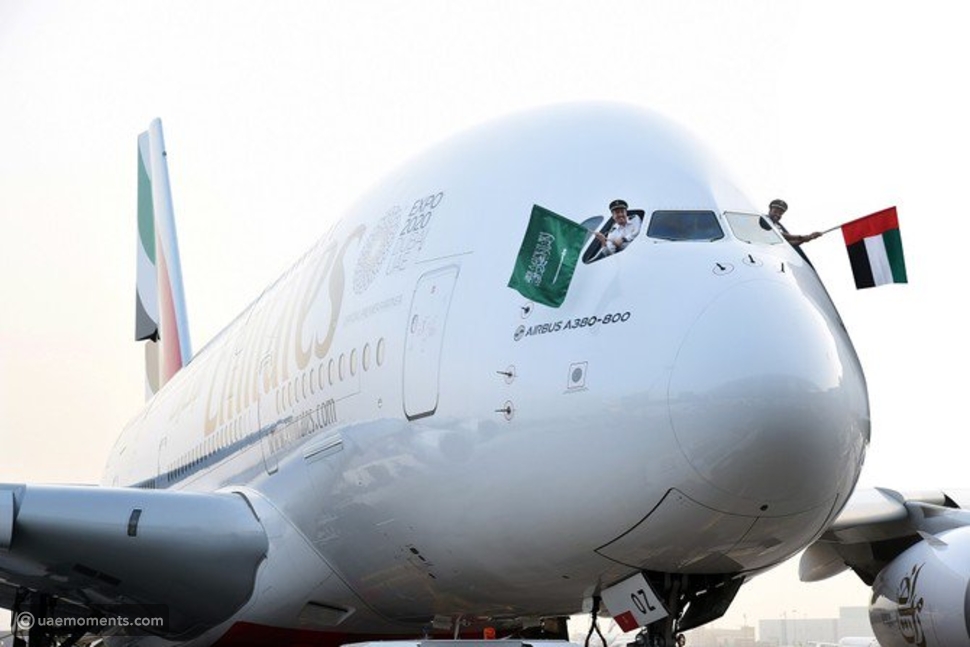 The Burj Khalifa was illuminated with the Saudi flag last night, while the Nasdaq Tower’s electronic billboard in New York’s Times Square was lit up with photos of King Salman, Crown Prince Mohammed bin Salman and the flags of Saudi Arabia and the UAE.

The images were posted by Nasdaq Dubai, the UAE-based operation of the New York equities exchange, on Twitter with the message: “Best wishes from #NasdaqDubai to #SaudiArabia on the occasion of the 88th National Day.”

In Lebanon, Pigeons’ Rock, also known as the Rock of Raouché, located in the sea of the western capital of Beirut, was lit in the colors of the Saudi flag. The rock, one of the most important Lebanese monuments, was lit during a ceremony attended by the charge d'affaires of Saudi Arabia, Waleed bin Abdullah Bukhari, along with a crowd of dignitaries, including the Mayor of Beirut.

In Washington, the Saudi embassy’s National Day bus toured around the capital on the weekend inviting people to its celebrations on Sunday in National Harbor, Maryland.

In the UAE’s capital, the General Command of Abu Dhabi Police decorated 88 of their cars - one for every year being celebrated – with the flags of Saudi Arabia and the UAE and the words “Together Forever.”

The UAE’s airlines got in on the game. Emirates operated a special one-off A380 service on the routes EK 813 and EK 814 on Sunday to the capital city of Riyadh, touching down at King Khalid International Airport at 3:30pm. Crew handed out scarves emblazoned with the countries’ flags, as well as white roses, to passengers boarding the aircraft.