First A380 flight to Pakistan welcomed pomp and style at Islamabad

Related articles
World's best airlines for 2018 by Skytrax
10 Fun Things to Do on a Plane: How to Pass the Time on a Long Flight
UAE To Require Attested Vaccine Certificates From Pakistani Travellers

After a welcoming ceremony, government officials, VIPs, media and officials from the travel industry were given a guided tour of the A380 by Emirates cabin crew.

"The landing demonstrated the airport’s readiness to accommodate the A380, the world’s largest commercial passenger jet," the airlines said in a press release.

Emirates currently has 104 wide-body double-deck airplanes A380s in service and 58 pending delivery, more than any airline globally, a press release by the airlines said, adding that it also recently announced a $16 billion deal for 36 additional Airbus A380 aircraft.

“We are proud to have operated this special A380 flight to Islamabad, the first time ever that our flagship aircraft has landed in Pakistan. The Emirates A380 is fundamental to our overall strategy, and bringing this popular aircraft to Islamabad represents a significant milestone in our operations to Pakistan, a country we flew our first ever flight to in 1985. We are very keen to now launch a scheduled A380 service to Pakistan and will continue to work with authorities to make these plans a reality,” said Sheikh Majid Al Mualla.

The airlines had invited two Pakistani members of its first-ever team as special guests on the flight: Captain Fazle Ghani, Emirates' first chief pilot and team lead for inaugural operations and Captain Ejazul Haq, one of the pilots who operated the first-ever Emirates flights from Dubai 33 years ago.

UAE has largest number of Indian migrants in world

The Emirates A380 aircraft on this one-off service was set in a two-class configuration offering seats in economy class and fully flatbed seats in business class as well as Emirates’ on-board lounge. 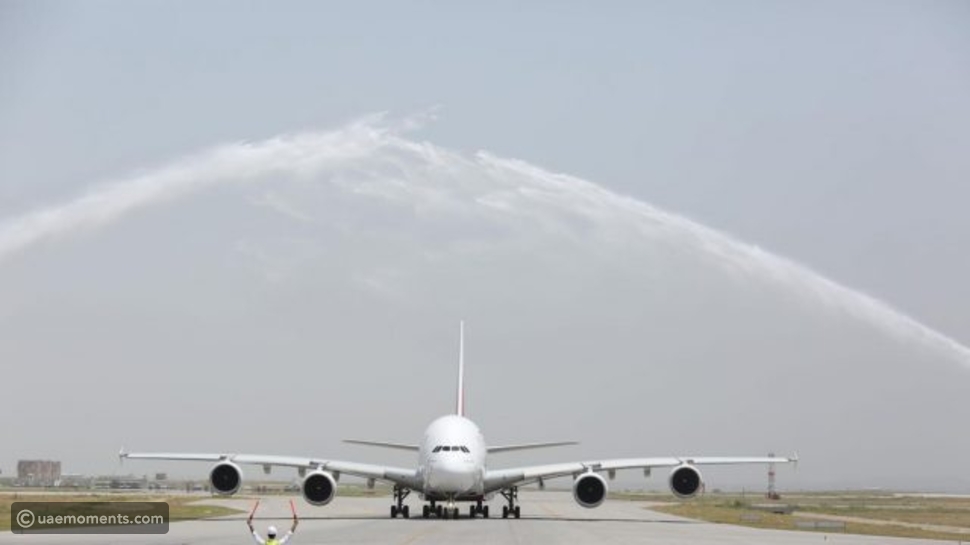 Emirates and Pakistan have a shared history tracing back to over 30 years when the airlines’ flight landed in Karachi on October 25, 1985.

The Islamabad International Airport, which was made operational on May 3, has upgraded facilities to accommodate wide-body double-deck jet airliners with two special parking bays and latest jet bridges.