TOP 10 LARGEST MOSQUES IN THE WORLD

10. The Holy Mosque of Delhi 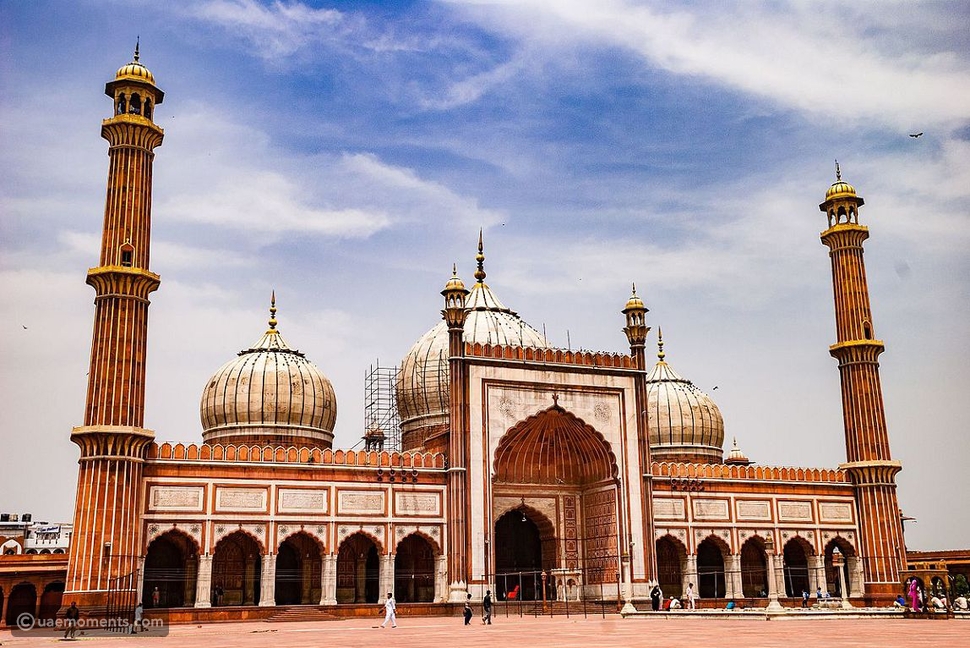 On the 10th place among the largest mosques in the world is the Cathedral Mosque of Delhi, or Jami Masjid. The erection of the building began during the reign of Shah Jahan I, the padishah of the Mughal empire.

His name went down in history, he was elevated on the orders of Jahan by the magnificent mausoleum of the Taj Mahal mosque. The construction of the Cathedral Mosque was completed in 1656. At the same time, it can accommodate about 25 thousand people. 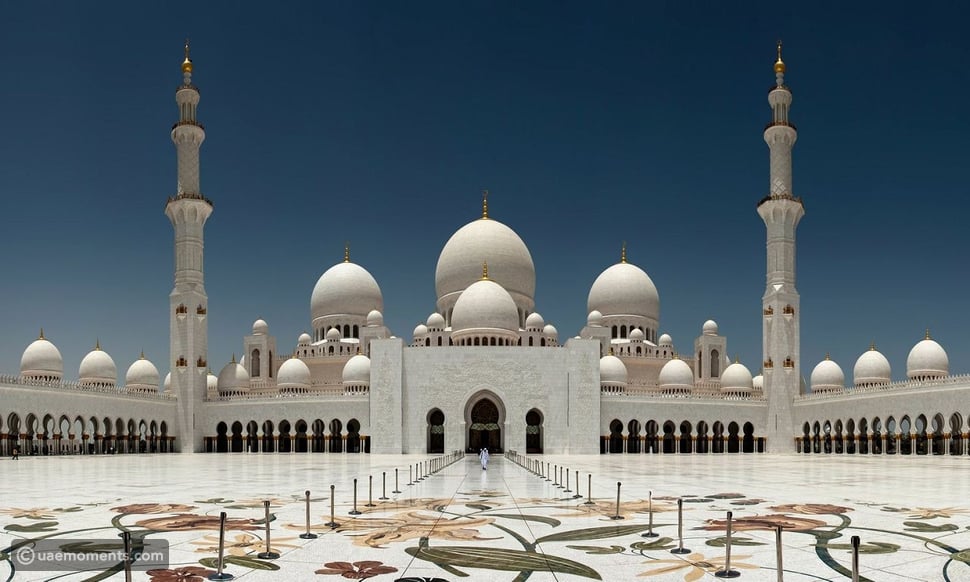 The Sheikh Zayed Mosque (United Arab Emirates) ranks 9th among the largest mosques in the world. It is famous not only for its size, but also for its stunning beauty. It is one of the main adornments of the city of Abu Dhabi. At the same time, there may be about 40 thousand people in it.

The mosque impresses with its interior: for decoration of buildings, colored marble and semiprecious stones were used. In addition, here is the largest and most luxurious chandelier in the world. The area of ​​the mosque is 22 thousand square meters.

8. The Mosque of Al-Saleh 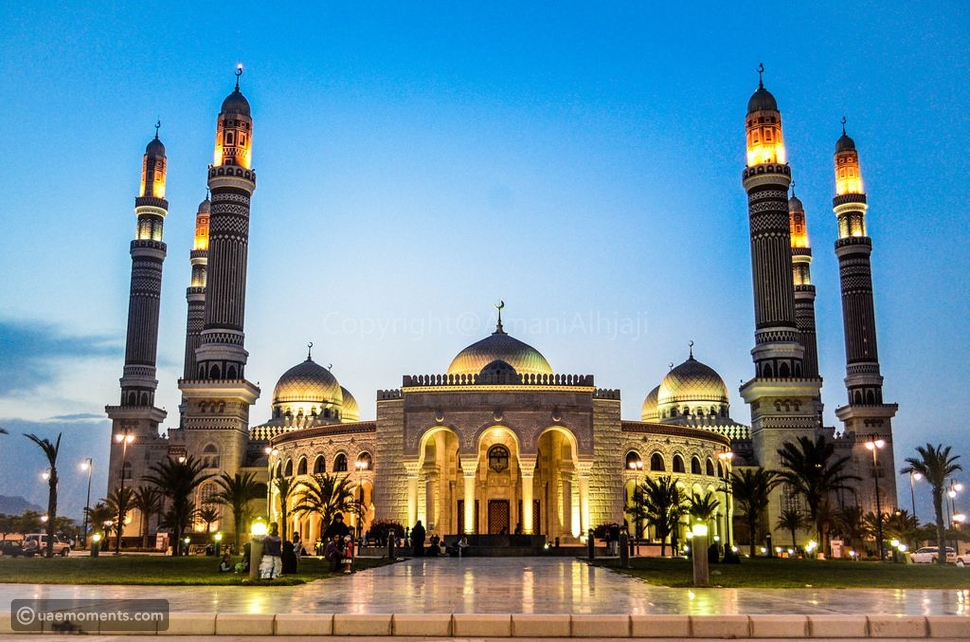 Eighth place among the largest mosques in the world belongs to Al-Saleh Mosque, a station in Yemen. The official opening of the main attraction of the country took place in 2008.

The construction of the mosque was financed by the President of Yemen. She managed the country in a huge amount — $ 60 million. The Al-Saleh Mosque is a modern building, which houses educational classes and several libraries. In the main hall can fit up to 44 thousand people. 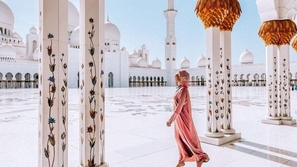 Badshahi Mosque, located in the Pakistani city of Lahore, ranks 7th in the list of the largest religious structures in the Muslim world.

It was built in the middle of the XVII century on the orders of the last ruler of the Great Mogul dynasty. At the same time in the mosque can be up to 60 thousand people. 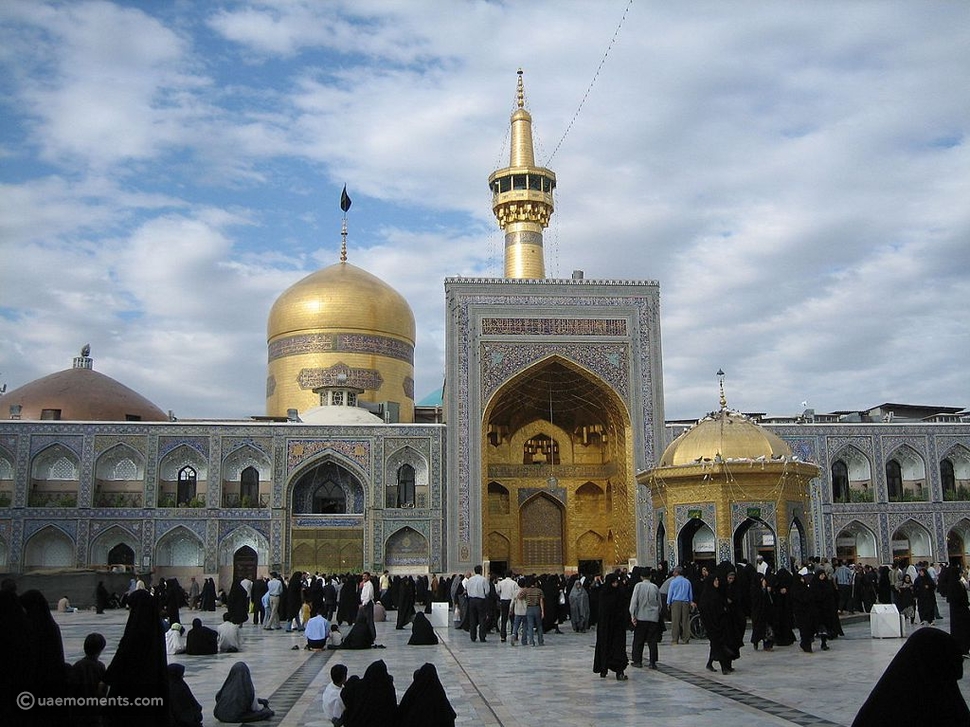 The sixth place among the largest mosques in the world is the architectural and religious complex of Imam Reza’s mausoleum. It is located in Iran, in the city of Mashhad. It includes the imam’s tomb, as well as other tombs of revered religious figures of Islam, a mosque, a cemetery, a library and a museum. The mausoleum is the main tourist attraction of Iran, which annually visits up to 20 million visitors.

When in 818 Imam Reza, who had great popularity among the people, was killed, he was buried near the tomb of the great Harun al-Rashid. Soon around the tomb grew the city of Mashhad. The construction of the complex began in the 13th century, during the reign of the Timurid dynasty. The first mosque in the burial place of the imam was built in the XI century, but soon it was destroyed. The area of ​​the complex is about 331 thousand square meters. Meters. Holds a mausoleum of 100 thousand people.

Worshipers in this mosque were wrong!

The Hassan II mosque is on the 5th place among the largest religious constructions of the Muslim world. Located in the city of Casablanca, the Hassan Mosque is striking not only for its huge size, but also for its beauty — a magnificent view of the Atlantic Ocean from the huge glass hall of the temple.

The mosque holds 105 thousand people. The area of ​​the temple is about 9 hectares. An interesting fact: all 800 million dollars spent on building a mosque are voluntary donations.

4. The Mosque of Independence 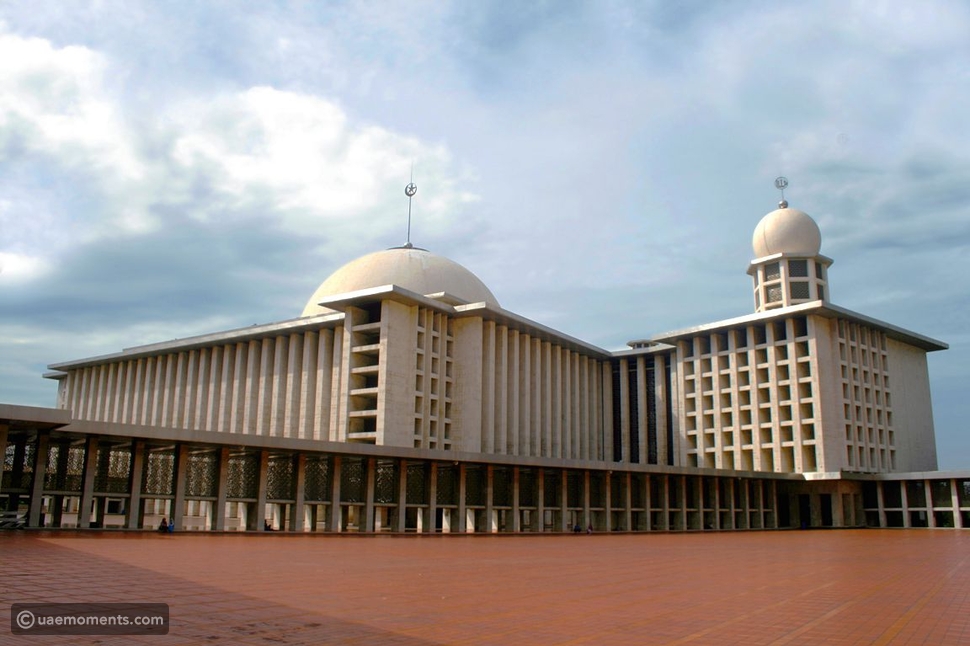 The Independence Mosque or Istiklal, located in Indonesia in the city of Jakarta, ranks 4th among the largest mosques in the world. When the country gained independence in 1949, this great event was decided to perpetuate the construction of the largest religious structure in South-East Asia.

The construction of the mosque began in 1961. The temple hosts about 120 thousand visitors at the same time. The area of ​​the mosque is 10 hectares. 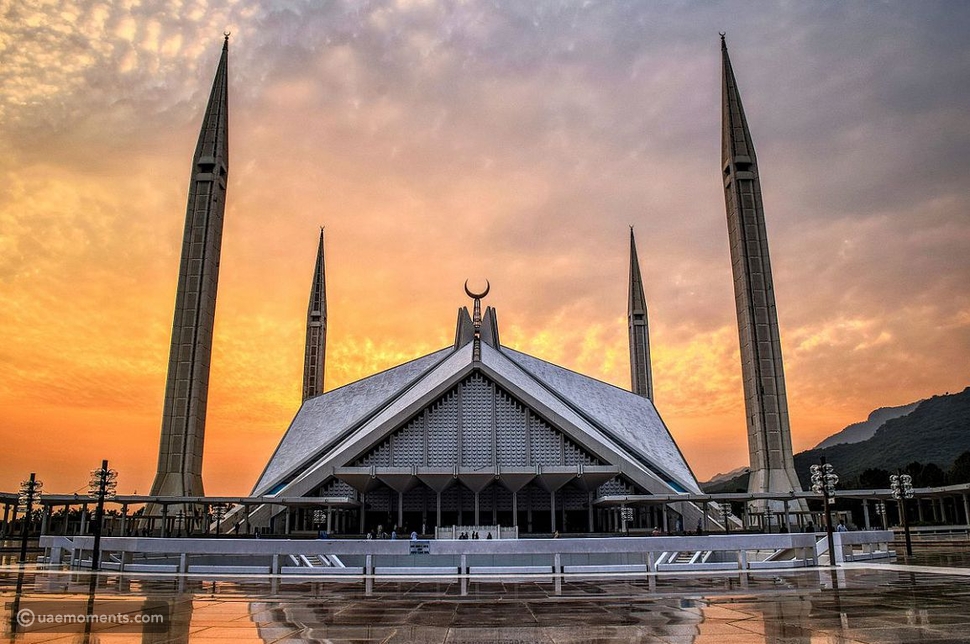 The third place among the largest mosques in the world belongs to the Faisal mosque, located in Islamabad. Its construction was financed by the government of Saudi Arabia. The building of the mosque is located in a picturesque area.

It is noteworthy that its design is very different from the traditional architecture of Muslim temples. Most of all in appearance the building resembles the tent of a Bedouin-nomad. The design to dream during its erection caused great dissatisfaction, but after the construction was over, critics admitted that they were wrong. The Faisal mosque accommodates about 300 thousand people. The area of ​​the mosque is 5 thousand square meters. 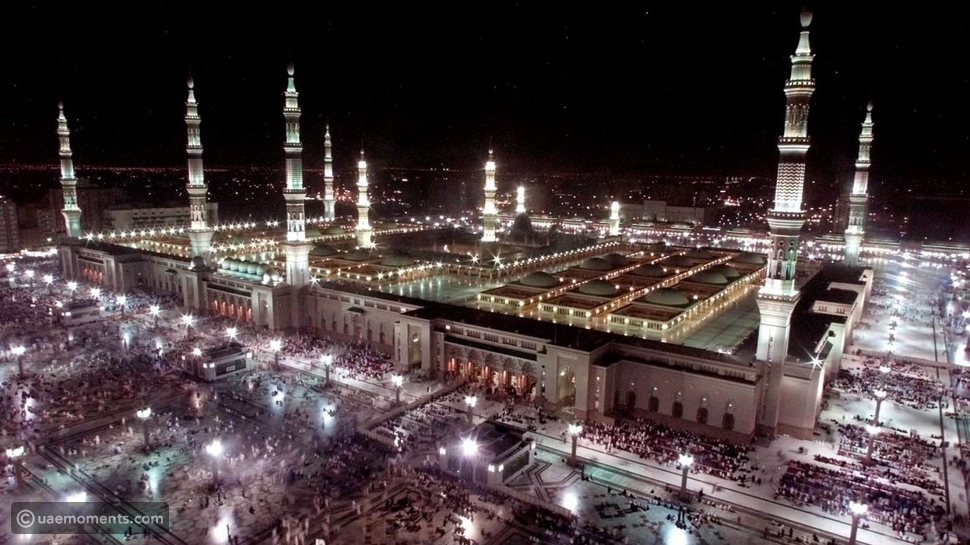 The second largest and most important for believers is the mosque in the world is in Medina. This is the Mosque of the Prophet, or Masjid al-Nabawi. It is commonly believed that the construction of the temple began in 622, and the Prophet Muhammad himself participated in it.

He was buried under the Green Dome. At the usual time the mosque of the prophet holds about 600 thousand people. During the pilgrimage it can accommodate up to 1 million believers. The area of ​​the mosque is about 400 thousand square meters. 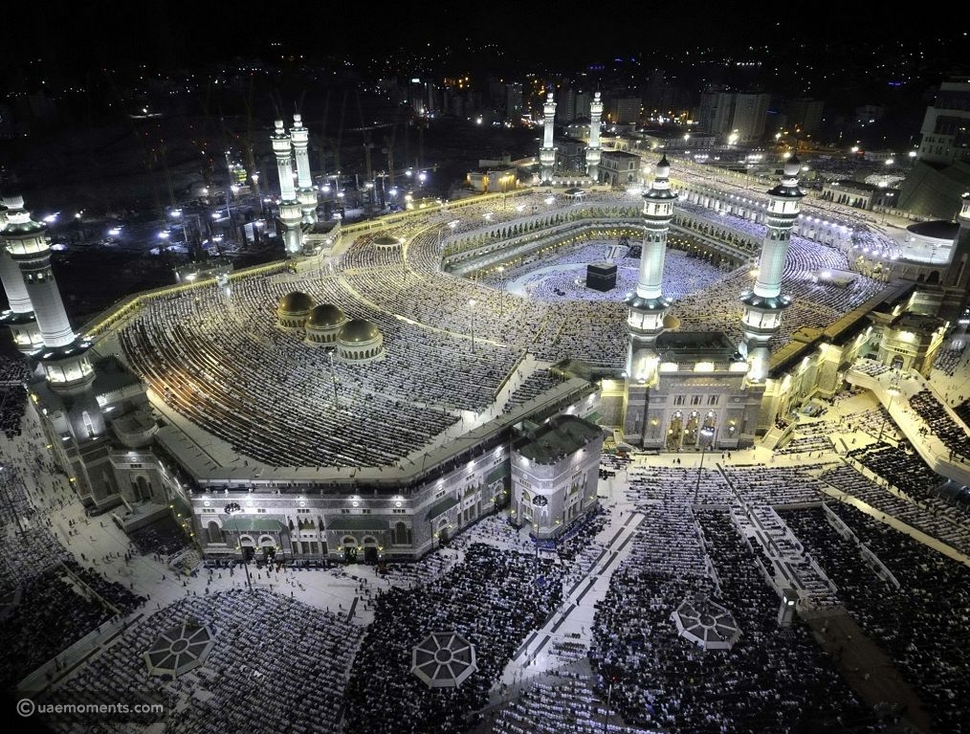 On the first place among the largest mosques in the world is the Forbidden Mosque, otherwise called Al-Haram. Named as it is forbidden to fight in it's vaccinity and thus referrenced as "Forbidden". It is located in Mecca, in Saudi Arabia. Here is the main value of the Muslim world — Kaaba. According to legend, the first builders of this relic were heavenly angels.

The mosque was first mentioned in 638. Over the long centuries of its existence, the main mosque of the followers of Islam was repeatedly rebuilt to accommodate as many visitors as possible. Now the Forbidden Mosque can hold about 1 million people. If you take into account and adjacent to the temple area, the number of visitors to the mosque can reach more than 2 million people. The area of ​​the religious complex is 357 thousand square meters. Meters, but you need to consider that the mosque is constantly expanding.