7 Facts You Must Know About Sheikh Zayed Grand Mosque

Sheikh Zayed Grand Mosque is simply a must see when you are visiting Abu Dhabi. It is magnificent to see during the day or the evening. It is beautiful, huge, and wonderful illustration of modern Islamic architecture.

We are sharing 7 facts you may not know about this piece of architecture.

1. Named After the Founding Father of UAE!

Abu Dhabi Grand Mosque was designed by Syrian architect Yousef Abdelky and its design has been inspired by Persian and Mughal architectural styles. The building is also influenced by the Abu al-Abbas al-Mursi Mosque in Alexandria, Egypt.

3. Among the Largest Mosques

The largest mosque of UAE, Sheikh Zayed Grand Mosque is also one of the largest mosques in the world. The building complex of the mosque covers an area of more than 12 hectares and measures around 290 meters (960 Ft) by 420 meters (1,380 Ft).

4. Material Sourced from around the world

The beautiful carpet in the main prayer hall is the world’s largest hand-knotted carpet. It took around 8 months to design, 12 months to knot, and 2 months to transport, trim, and weave the pieces together. Approximately 1,200 workers from Khorasan province at the Iran Carpet Company turned this 5,700 square meters carpet into reality under directions of Iranian artist Ali Khaliqi.

Sheikh Zayed Mosque houses seven crystal chandeliers made by Faustig, a Germany-based firm specializing in crystal chandeliers. The chandelier present in the main prayer hall weighs around 12 tons and is one of the largest chandeliers used in a mosque. All chandeliers are made from gilded stainless steel and brass using approximately 40kg of 24 karats galvanized gold. 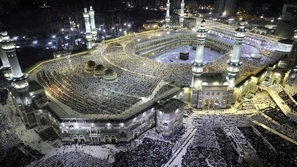 More: THE 10 LARGEST MOSQUES IN THE WORLD

The construction of Sheikh Zayed Grand Mosque began in 1996. It took more than 3,000 workers and 38 contracting companies to construct the mosque. It was opened for worship in 2007.