On The Tallest Tower In The World, Burj Khalifa

A new video posted on Emirates airlines' Instagram account shows stuntwoman Nicole Smith-Ludvik pulling off yet another stunt to promote Expo 2020 Dubai. The video shows Smith-Ludvik, dressed as an Emirates flight attendant, standing on top of Burj Khalifa with a set of placards in a nod to the famous scene in the 2003 film Love Actually. 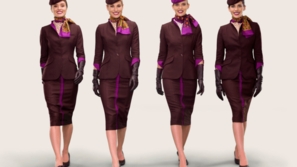 Then, as she reveals the third placard, which reads "Finally, here come my friends," a colorful A380, the world's largest passenger airline, whizzes past her in the jaw-dropping clip. But Smith-Ludvik is unfazed as she holds up her final cards.

"Fly the iconic Emirates A380 to the world's greatest show," the cards read. The body of the Emirates A380 conveys the final message, which is a picture of Smith-Ludvik holding up another card that simply says: "See you there." 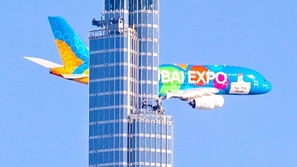 Smith-Ludvik wrote: "We've done it again - but bigger." Previously, Emirates put out a video in August 2021 to celebrate the fact that the UAE had been taken off the UK's red list, sharing the video on her Instagram page.

No wonder Emirates is ranked as one of the best airlines in the world!